My Hannah’s Bookshelf Christmas Special aired on Christmas Eve (on North Manchester FM, of course). If you missed the show, you can listen to it on the player below. But, as promised, here’s a list of the books I featured on my festive show.

The Sittaford Mystery by Agatha Christie (1931)

Obviously, any list by me is probably going to include some Golden Age detective fiction. And that quite often means a bit of Agatha. For this list, my recommendation is The Sittaford Mystery (published in the US as The Murder at Hazelmoor). Although it’s not set on Christmas Day itself, it takes place in the run-up to the big day. It’s not the festivities themselves that form the backdrop to the mystery, but rather a dramatic case of seasonal weather. The story begins at Sittaford House, an old-fashioned country house on Dartmoor. The house is owned by Captain Trevelyan, but he’s leased it Mrs Willett and her daughter for the winter (bit weird – why would you go to spooky old Dartmoor for the winter?). As a snowstorm begins to engulf Sittaford, Mrs Willett throws a tea party. One of the guests suggests a spot of table-turning for entertainment, and a message comes through from the beyond: ‘Captain Trevelyan… dead… murder…’ Sure enough, 6 miles away, Captain Trevelyan lies dead in the snowbound village of Exhampton!

This is a standalone novel, and so it doesn’t include any of Christie’s series detectives. The investigation officially falls to Inspector Narracott; however, the real sleuthing is done by Emily Trefusis, the fiancée of the prime suspect (Trevelyan’s nephew). Emily is determined to see her boyfriend cleared of his uncle’s murder, so she teams up with tabloid reporter Charles Enderby to get to the bottom of things. While this might not be the best-known of Christie’s mysteries, it’s an atmospheric wintery little tale, with all the clues and red herrings you’d expect from the Queen of Crime.

I’m really pleased to be able to include a book by someone who’s appeared as a guest on the show this year, and it’s a proper seasonal treat too. For a lot of people, there’s nothing more Christmassy than a classic ghost story – and what better than one of M.R. James’s Ghost Stories of an Antiquary? Like a lot of people, I think my favourite is ‘Oh, Whistle, and I’ll Come to You, My Lad’, which takes some beating as a truly scary ghost story.

Between 1971 and 1978, the BBC broadcast a series of dramas entitled A Ghost Story for Christmas. Most of these stories were adapted from M.R. James’s tales, and all were directed by Lawrence Gordon Clark. In The Christmas Ghost Stories of Lawrence Gordon Clark, Tony Earnshaw gathers the original stories together, but prefaces each with a brand new introduction from Clark, as well as between-the-scenes photographs and a foreword by the rapidly-becoming-legendary Mark Gatiss. It’s a great insight into a bit of seasonal TV nostalgia, as well as a chance to revisit some iconic Christmas spookiness. Check out the link about to Tony’s website for more info on the book.

And if you want even more M.R. James goodness, another previous guest on the show – John Reppion – also has a new book of James’s stories out. Ghost Stories of an Antiquary Volume 1 is a graphic collection of short stories, adapted by Leah Moore and John Reppion, and it’s available to buy now.

Perhaps not the first book that jumps to mind when you’re thinking about Christmas fiction, but another big recommendation from me. Ibsen’s controversial play opened in Copenhagen on 21st December 1879 and, though it’s not the thing most people remember about it, the play takes place over the Christmas period. Indeed, our first introduction to the play’s protagonist – Nora Helmer – is when she returns home after doing some Christmas shopping. On that grounds, I think it’s fine to include it in my list of festive reads.

Ibsen’s play focuses on Nora and her dissatisfaction with life. She’s married to Torvald and, while the marriage isn’t marked by conflict, the couple are somewhat distant from one another. Nora is unable to talk to Torvald about issues of money and employment (or the fact that she has borrowed money and is having to work secretly in order to pay it back). To her husband (as it was with her father), Nora is a ‘doll’ to be played with, not a real person. The situation reaches a head over the festive period, and Nora is forced to make a decision – does she do her ‘duty’ as a daughter, wife and mother? or does she try to break free of their restrictions and find a life outside the ‘doll’s house’? Ibsen’s three-act play focuses on issues of marriage and female identity in a way that seems a bit ahead of its time. It’s a fascinating study, and so is a definite recommendation.

Although romance isn’t usually my genre of choice, I thought it’d be good to include a book on this list that’s full of Christmas cosiness. And Rosamunde Pilcher is always a good bet if you like your fiction warm and cosy. Winter Solstice was published in 2000, and it begins by introducing us to Elfrida Phipps – a 60-odd year old single woman, who befriends the Blundell family. When Gloria and Francesca Blundell are killed in a car accident, Elfrida takes the grieving Oscar under her wing. The two of them travel to Scotland to visit the home of Oscar’s grandmother. The bereaved man intends to avoid all seasonal festivities, but a snowstorm sees him trapped with Elfrida at Corrydale. When they’re joined by Carrie (a young relative of Elfrida’s) and her niece – who are both escaping from troubled relationships (though of very different kinds) – it seems that there might be a party at Christmastime after all. All that’s needed is a handsome stranger – who appears, in the shape of Sam Howard – and the group are forced to huddle together against the unfriendly weather. Will the festive season begin to mend the broken hearts? Well… obviously… but Pilcher’s book manages to stay on the right side of heartwarming and avoid becoming too cloying or over-sentimental. The atmospheric descriptions of weather and place really help with this, and it’s very easy to slip into the world of Winter Solstice for a few hours of cosy Christmas reading.

The next book on the list is kind of the ultimate in Christmas nostalgia (even if it is nostalgia for a world most of us have never actually experienced). The story of the Nutcracker is just one of those tales that are guaranteed to make you feel festive. Most people are probably more familiar with the story as told in Tchaikovsky’s ballet (which was based on Alexandre Dumas père‘s adaptation), but I thought I’d include Hoffman’s original version of the story on this year’s festive reading list. The story begins on Christmas Eve, with Marie and Fritz Stahlbaum eagerly awaiting a present from their godfather Drosselmeyer. Drosselmeyer is a clockmaker and inventor, and he brings the children a wonderful clockwork castle – but little Marie (who becomes Clara in the ballet) is more taken with the wooden nutcracker, which she treasures like a toy. As the grandfather clock chimes, Marie begins to see strange things appearing before her eyes, and that night she witnesses a magical (and kind of epic) battle between an army of animated toys and the mice that have sprung up from the floorboards.

Hoffman’s story is enchanting, fantastical and, at times, even a little dark. And whether you appreciate it through the adaptations (like a performance of the ballet) or the original story, it’s undeniably part of the overall feel of Christmas now. Who doesn’t love a bit of clockpunk magic with their stollen and Baileys? 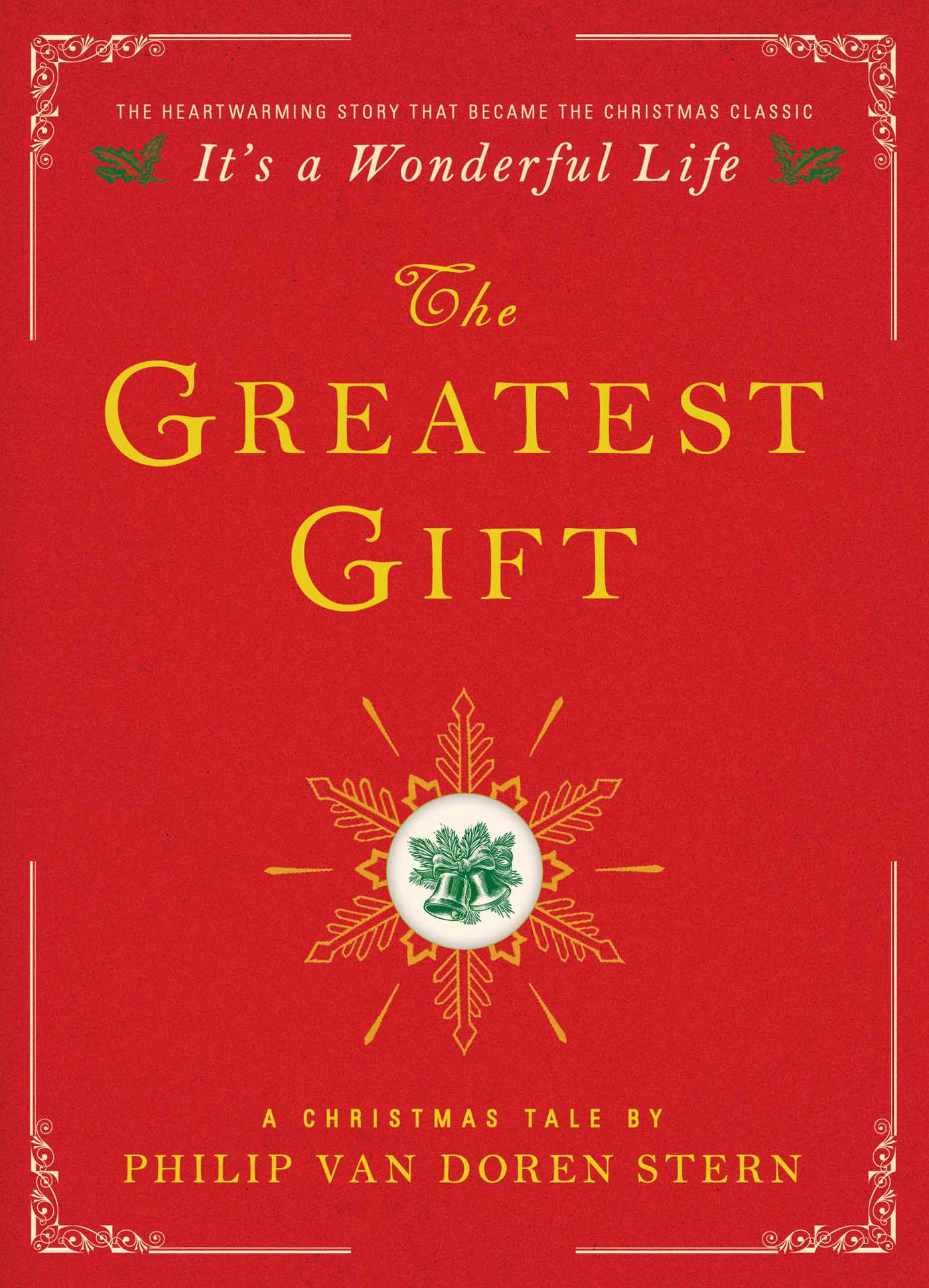 So I ended the show with a Christmas story that’s very close to my heart… so much so that I actually welled up just talking about it. My Christmas Eve wouldn’t be complete without It’s a Wonderful Life – I watch it every year, and I cry every single time. So I decided to end this year’s Christmas reading list with ‘The Greatest Gift’, the short story by Philip Van Doren Stern on which Frank Capra’s film was based.

Van Doren Stern’s story introduces us to George Pratt, a man who is utterly dissatisfied with his life. In fact, George feels so bad that he contemplates ending it all. Fortunately, he is prevented from doing this by the intervention of a rather odd stranger. This man offers to grant George’s fervent wish, and show him would the world would look like had he never been born. Because of the different form, there are some differences between ‘The Greatest Gift’ and It’s a Wonderful Life (e.g. there are more supporting characters in the film, as there’s more room for fleshing out their relationships with George). I also have to admit that the lesson George (Bailey) learns in It’s a Wonderful Life tugs on the old heartstrings a bit more than the slightly simpler lesson in ‘The Greatest Gift’ (and now I’ve got a lump in my throat again). But ‘The Greatest Gift’ is still a charming little Christmas story, and well worth a read. For that reason, I thought it deserved to headline my list of festive books this year.

To hear more about all of these books and my reasons for choosing them, you can listen to the show here: