On North Manchester FM today, it was my Hannah’s Bookshelf Christmas Special. As has now become tradition, I devoted the show to a selection of my favourite festive reads. If you missed the show, you can catch it on the player at the bottom of this post, but – as promised – here are the details of the books I talked about on air. Let me know what you think in the comments.

I started the show with quite the classic! The Lion, the Witch and the Wardrobe is the first (by publication date) or second (by chronology) book in Lewis’s Chronicles of Narnia. It tells the story of the Pevensie children, evacuated to the country house of a professor during the Second World War. As the children explore and play games in their temporary home, the youngest Pevensie – Lucy – stumbles into a wardrobe that conceals a wonderful surprise. While the full Chronicles of Narnia are an extended exercise in (occasionally moralistic) world-building, infused with Christian theology, mythology and apocrypha, The Lion, the Witch and the Wardrobe (still most commonly the first instalment that people encounter) is loved as a Christmas story – the world beyond the wardrobe that Lucy encounters is beset by a dark magic that makes it always winter, but never Christmas. And, if we believe Lewis’s anecdote about the original idea for the book – a recurring image of a faun, standing in snow under the light of an old-fashioned lamp-post, gripping a pile of Christmas parcels – then it really does belong on this list of festive tales.

Anyone fancy some Turkish delight?

The Night Before Christmas (aka Christmas Eve) by Nikolai Gogol (1832) 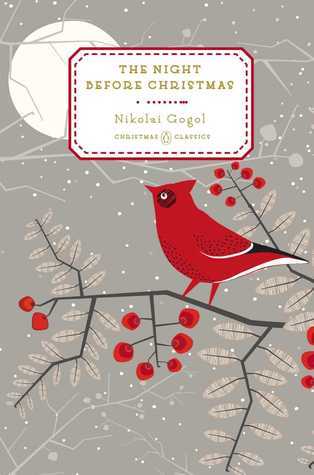 The Night Before Christmas (also translated as Christmas Eve) is a long short story/short novella published in the second part of Gogol’s Evenings on a Farm Near Dikanka, which brought together a collection of previously-published stories. Although Gogol is known as a Russian writer, he grew up in what is now Ukraine, and Evenings on a Farm Near Dikanka includes stories inspired by Ukrainian folklore, folk history and culture, as well as memories of Gogol’s childhood and the reminiscences of his mother.

The Night Before Christmas begins with the devil flying over Dikanka, enjoying a night of freedom before returning to Hell. As a vengeful prank on the local blacksmith, Vakula, he decides to steal the moon and hide it in his pocket. What follows in a folktale-like story of thwarted love, supernatural intervention, mistaken identity, courtship challenges and slapstick comeuppances – complete with a witch, a Tsaritsa and a demonic snowstorm. Some critics have suggested that The Night Before Christmas draws as much on stock characters from the repertory of traditional Ukrainian puppet theatre as on folklore, and this give the story as ‘performance’ feel. It’s wonderfully wintery, and a great story to curl up with on a cold Christmas Eve.

Something a little bit different now, and a hefty dose of horror from Hill. NOS4A2 (published in the UK as NOS-4R2, which makes sense once you learn what the title refers to) is the story of Charles Manx, a monstrous, vampiric child-catcher, and of Vic McQueen, the girl who brought Manx’s mayhem to an end. Switching between 1986, 1996, 2008 and 2012, the story introduces us to Manx, an amusement-loving creature who drags children into his horrific Christmasland, where he attempts to preserve them as innocent and admiring (or, perhaps, as vampiric monsters), with the help of his Wraith (a 1938 Rolls Royce which bears the eponymous vanity licence plate). Vic is a young girl with a supernatural ability of her own, who becomes embroiled with Manx’s maniacal career, and ultimately leads to his capture. But that’s not the end of the story…

If you enjoy the Christmassy horror of NOS4A2, there’s even more festive fear in the prequel comic book, Wraith: Welcome to Christmasland, written by Hill with art by Charles Paul Wilson III.

A Christmas Party (aka Envious Casca) by Georgette Heyer (1941) 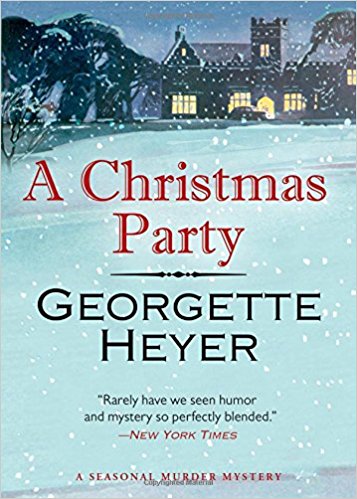 It wouldn’t really be one of my lists without a bit of Golden Age (well, late-Golden Age) detective fiction, would it? There were a few titles I thought about including here, but I finally settled on Heyer’s 1941 novel, because I love the attention to detail in the ‘country house Christmas’ parts of the book.

The story is set at Lexham Manor, home of grumpy businessman Nathaniel Herriad. Nat’s brother Joseph has pressured him into throwing a traditional Christmas party and, much not Nat’s horror, has filled the house with tinsel, baubles and trees. The guests at the party are Joseph and his wife Maud (a former chorus-girl); nephew Stephen and his fiancée Valerie Dean; niece Paula, accompanied by a young playwright Willoughby Royden; Nat’s business partner Edgar Mottisfont; and distant cousin Mathilda Clare. None of the guests seem in the mood for a festive frolic, and things take a dark turn when Nat is found murdered in his bedroom. Heyer’s novel is a locked room mystery, and while the clues might not be as neat as Agatha Christie’s or the solution as surprising, it’s chock-full of Christmas atmosphere and seething family tensions.

Hiddensee: A Tale of the Once and Future Nutcracker by Gregory Maguire (2017)

On last year’s Christmas Special, I included E.T.A. Hoffman’s The Nutcracker and the Mouse King on my list of festive books. And as regular listeners might have spotted, Gregory Maguire is one of my favourite writers. So, it’s wonderful to be able to include Maguire’s idiosyncratic take on the Nutcracker on this year’s list, especially as it was only published this October.

In common with Maguire’s other recastings of older stories, Hiddensee isn’t actually the story of the Nutcracker, but rather of Herr Drosselmeier, the man who arrives at Christmas with magical toys for Clara/Marie and her brother Fritz. Maguire begins the story deep in the forest of Bavaria, where a boy named Dirk lives with a mysterious ‘elderly’ couple. Dirk is a foundling, and when an accident forces him out of the fairy-tale forest and into the ‘real world’, we find him negotiating the world of early nineteenth-century Germany with the usual unease of a Maguire protagonist. Dirk Drosselmeier eventually meets Clara, but this is a very different version of their relationship to the one found in Hoffman’s tale (or, indeed, in Tchaikovsky’s ballet). It’s a wandering, mesmerising story that makes you see the events of The Nutcracker in quite a different light.

A Christmas Carol by Charles Dickens (1843)

This is my third Hannah’s Bookshelf Christmas Special, but for some reason it’s the first time I’ve chosen to talk about the daddy of all Christmas books… Charles Dickens’s A Christmas Carol.

I don’t know if the story of Ebeneezer Scrooge and the spirits that visit him on Christmas Eve really needs much of an introduction. Instead, I talked about the book’s immediate popularity – it was first published on 19th December 1843 and had sold out by Christmas Eve – and its enduring legacy. Dickens wrote a number of stories and articles about Christmas, believing that its ‘traditions’ and ‘meaning’ were in need of revival. Much of what he imagined as a ‘true’ Christmas he attributed to traditions of the Middle Ages, but in fact we now more commonly associate these practices with Dickens’s Victorian world. Among the many contributions to Christmas made by Dickens’s Christmas Carol is the popularization of the greeting ‘Merry Christmas!’

As seemed fitting, I ended this year’s Christmas Special with the final words of Dickens’s novel:

And it was always said of him, that he knew how to keep Christmas well, if any man alive possessed the knowledge. May that be truly said of us, and all of us! And so, as Tiny Tim observed, God Bless Us, Every One!

To find out more about these books, and my reasons for choosing them, you can listen to the Hannah’s Bookshelf Christmas Special here: