Inspired by my interview with Heather Burnside, a local Manchester novelist, I decided to devote a whole edition of Hannah’s Bookshelf to books set in my hometown. If you didn’t catch the show, you can listen to a recording on the player below. But, as promised, here are the books I featured on the show.

The Bird Room by Chris Killen 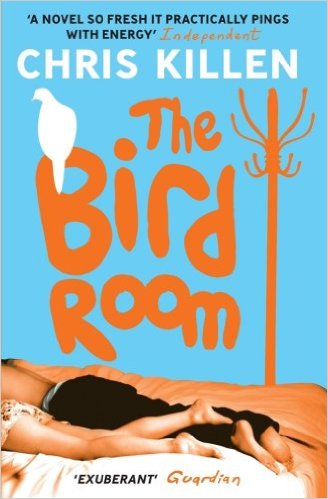 In preparation for this show, I did an internet search to see if there were any books set in Manchester that I hadn’t heard of. I found a 2009 article in The Guardian (by Jerome de Groot) that pointed me to Chris Killen’s 2009 debut novel, The Bird Room. This offbeat and unsettling novel features a paranoid and jealous man named Will, who is in a relationship with Alice. Will introduces Alice to his friend – also called Will – and becomes obsessed with the idea that she will cheat on him. Alongside this is the story of Helen – who used to be Clair – a wannabe actress who makes her money answering adverts on ‘adult contact’ websites. These confusing and shifting identities play out in parallel (and also possibly not in parallel) in a fragmentary narrative of (post)modern life.

But, although I thoroughly enjoyed Killen’s novel, it’s inclusion in this list may not be completely appropriate. The novelist was based in Manchester when he wrote the book, but The Bird Room is not unambiguously a ‘Manchester’ novel. There is nothing specifically tying the novel to any particular city (except that one episode reveals that it is definitely not set in Cardiff) – so is it a Manchester novel? Perhaps. But, then again, perhaps not.

Love on the Dole by Walter Greenwood

Walter Greenwood’s 1933 novel is often counted in lists of ‘Manchester’ novels, so I thought it deserved a mention on the show. Not least because it’s a good example of the ‘grim up north’ social issues novel that is often associated with the city. There is a problem, of course, with including Greenwood’s book on this list – and I’ll come back to that shortly.

Love on the Dole‘s protagonist is Harry Hardcastle, a young man who works in a pawn shop, but leaves for the ‘glamour’ of factory work. The novel starts with the General Strike of 1926, but it’s main story takes place in 1931, taking in the Great Depression and the mass unemployment that followed. Harry is laid off from Marlowes factory, and is forced to face the widely decried Means Test in order to receive dole money. Meanwhile, he enters into a relationship with a young woman called Helen (another Helen! hmmm… I wonder if this will be a pattern). Helen gets pregnant, and the two are forced to marry, despite not having the means to start a family. Harry becomes involved with the National Unemployed Workers Movement (founded in 1921 by members of the Communist Party of Great Britain), and the novel’s climax takes place at the NUWM march on Salford Town Hall in 1931.

And there’s the problem: Love on the Dole isn’t set in Manchester, but in Salford. Now, readers from further afield may not realize the difference, but for some of us there’s a world of difference between Manchester and Salford (even if we’re a bit fuzzy on where the boundaries are). In fact, much of the best-known writing about social conditions in the industrial north is by Salford, rather than Manchester, writers. One of Salford’s most famous writers is Shelagh Delaney, who wrote A Taste of Honey. Last year, the city decided to honour the playwright with an annual ‘Shelagh Delaney day’, to be held on 25 November. 2015’s programme includes a new adaptation of Delaney’s ‘All About and to a Female Artist’, set to music by Stuart Stevens, which will be performed at the Salford Arts Theatre.

Okay… so that’s a book set in an undisclosed city and a book set in Salford… time to move on to the books that are definitely set in Manchester!

McDermid’s Kate Brannigan series follow the exploits of Manchester-based PI Brannigan, as she investigates the darker side of the city. There are six books in the series: Dead Beat (1992), Kick Back (1993), Crack Down (1994), Clean Break (1995), Blue Genes (1993) and Star Struck (1998). I enjoyed all the series, but I think Blue Genes is my favourite – hence why I chose that one to talk about on the show.

Kate Brannigan begins the book facing a number of crises: her business partner wants to sell up and emigrate and her current investigations are not going well. She then discovers that her best friend’s girlfriend is pregnant, apparently as the result of a pioneering (but illegal) fertility treatment. Things get really complicated when the doctor who carried out the treatment – known to the expectant couple as Helen Maitland, though this may not be her real name – is found murdered. Blue Genes takes to the mean streets of Manchester in an energetic and enjoyable (though sometimes a little far-fetched) crime thriller.

The Automated Alice by Jeff Noon

The Automated Alice (1996) is the third book in Noon’s Vurt series, following on from Vurt (1993) and Pollen (1995), and coming before Nymphomation (1997). All four novels are set in Manchester – or, at least, in a version of Manchester. The Automated Alice is also a sequel to Alice’s Adventures in Wonderland and Through the Looking-Glass; as the book states, it’s a ‘trequel’. Noon’s Alice (and her doll Celia) fall into an alternative ‘future’ version of Manchester, which is inhabited by ‘Newmonians’ (hybridized humans) and run by the Civil Serpents. Filled with Noon’s characteristic wordplay, twisted part-steampunk, part-cyberpunk aesthetic and some affectionate nods to Carroll’s original novels, The Automated Alice is a strange and compelling novel, which works equally as a sequel to Carroll’s books, an instalment in the Vurt series, and a standalone story in its own right.

The Leaping by Tom Fletcher

Although Fletcher’s 2010 debut novel (like the follow-up books The Thing on the Shore and The Ravenglass Eye) is mainly set in Cumbria, it’s early chapters set in Manchester are the reason for its inclusion on this list. This stunning horror novel is told alternately from the perspectives of Jack and Francis, two recent graduates working in a call centre in Manchester who are intent on prolonging their student lifestyle for as long as possible. Jack meets a woman named Jennifer, who buys Fell House in Cumbria and invites Jack’s friends to a housewarming party. But as the book’s cover warns: ‘an ancient evil is waiting’. Once the characters travel to Fell House, the book leaves Manchester for the atmospheric creepiness of Cumbria; however, the Manchester chapters are as terrifying a version of the city’s urban horror as you are likely to find. From the stifling banality of the call centre, to the oppressive darkness of the street’s at kicking-out time, the Manchester in Fletcher’s novel is redolent with a ‘modern evil’ that lures the characters (and the readers) to its ancient Cumbrian counterpart.

The Leaping is one of my favourite novels – it’s one of only three books that have given me genuine nightmares after reading – and I’ve reviewed it in more detail on my other blog.

Hungry, the Stars and Everything by Emma Jane Unsworth

I ended the show with something a little closer to home – it is North Manchester FM, after all. Published in 2011 by Hidden Gem (an imprint set up by Sherry Ashworth), Hungry, the Stars and Everything is the debut novel by Prestwich author Emma Jane Unsworth. I first became aware of Unsworth’s book when I was involved in an event at the Prestwich Book Festival; the 2012 festival programme included a collaborative event with Unsworth and chef Mary-Ellen McTague. At the event, McTague’s now-closed Prestwich restaurant Aumbry served the menu described in the book, accompanied by readings from Unsworth.

In Hungry, the Stars and Everything, restaurant critic Helen Burns (our last Helen of the day!) visits a new and intriguing Manchester restaurant called Bethel in order to review the work of their mysterious head chef. Each chapter begins with a course from the taster menu being placed in front of Helen; she brings the food to her mouth and is immediately transported to a memory of her past. It’s through this patchwork structure that we come to know Helen and her relationships – including her troubled relationship to food and alcohol – and to realize the crisis she is currently facing. In many ways, this style of storytelling reminded me of Kate Atkinson’s Behind the Scenes at the Museum, though the books differ significantly in terms of character and tone. I can’t say Helen is always the most sympathetic character, but this just makes her more interesting (in my opinion). And then there’s the identity of that mysterious head chef…

Hungry, the Stars and Everything is an assured and accomplished debut – and it’s a strong recommendation from me.

To hear more about these books – and some general musings about Manchester’s place in fiction – you can listen to the show here: